Taylor Series is the expansion of the function. It represents function as infinite sum of the derivative values of the function. The series was introduced by Brook Taylor. The series is approximation of a real-complex function around a point. This series if developed around zero is referred to as Maclaurin Series, introduced by Colin Maclaurin, a Scottish mathematician.

What is Taylor Series?

The Taylor Series is polynomial approximation of a function. It is nothing but the "infinite degree" of Taylor polynomial. It is a special kind of power series.

Let's say, there is a function  which is infinitely differential at;  then the series centered around will be

Suppose a= 0, then the series becomes Maclaurin series. 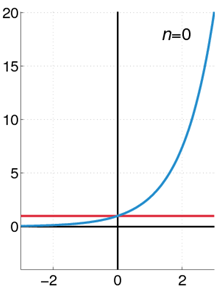 Also, this can regarded as taylor polynomial of Tanx for degree 7.

What is the Taylor Series?

To find the series, we have start with the derivates of

Now, we will find the function and derivates

Taylor Series follows Taylors theorem which states that if

and it hold the condition

Then the series is,

The Taylor series is basically a power series. It is summation of series of differential taken around a particular point. Lets understand how it works with help of an example

Suppose a function  needs to be approximate around a point .Let's assume point to be zero. As the function is continuous let take a constant function y = f(0). then,

The second derivative would be

The third derivative would be

The approximation will addition of all these, it will be

The foremost important application of the series is the calculation of the function to the approximate value. In algorithm series are used indirectly, for instance algorithm CORDIC uses series to find the value of arctan2-n before hard coding them. It is also used in Numerical analysis such as error approximation and error bound estimation.

The series expansion has helped in the development of many other advanced techniques that manipulates using past approximation for cancelling the error. one such example is Romberg procedure for integration.

It have some practical application in physic such as  it is used to develop pendulum equation  and Einstein Brownian motion. Taylor Series calculator is also widely used in applied mathematics and engineering. Although the series is being widely used in various subject it have certain constraints such as it is polynomial and just approximation. It shows error if moved away from the point of expansion.

If you need more help in taylor-series