Z-test is a parametric statistical test generally used to test the hypothesis regarding the equality of the mean(s) of Normal Populations provided the population variance to be known. In this test the distribution of the test statistic under the null hypothesis is said to follow a Standard Normal Distribution that is with mean of the distribution as 0 and the variance as 1.

Now the test statistic is

Z-test is also used to test the equality of two means of two independent univariate normal variables with the population variance to be known and equal.

Also for testing the location of bivariate normal population. The testing procedure is bit similar to the process stated above.

The Graph of Z-Test at 5% Level of Significance

Graphs of Z-Test for different alternatives 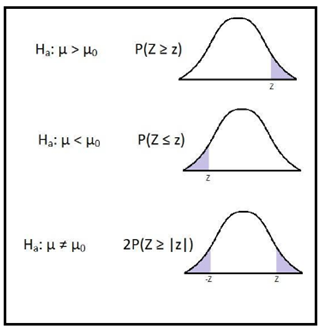 A cigarette manufacturer sent to a laboratory presumably identical samples of tobacco. They made five determinations of the nicotine content in milligrams as follows: (i) 21, 25, 27, 18, and 29. Test whether the mean is equal to 26 assuming the variance as 2. (Assume normality)

Then |Z|>c and the hypothesis is rejected at 5% level of significance and it is concluded that the mean nicotine content is not 26.

T-test is used for testing the hypotheses regarding the means of normal populations when the population variance is unknown.

It is also used to test the equality of population proportion.

Here we discuss some important properties of the Z-test:

Other Uses of Z-test

If you need more help in z-test