1. What is Central Limit Theorem?

Central Limit Theorem is the backbone of probability theory. The theorem shows that for a given fairly large ‘n’ (Sample size) from a population with finite variance, the mean samples taken from the population are same as a population mean.

What does CLT stand for?

What makes the Central Limit Theorem so important?

Central Limit Theorem in the mathematical theory of probability is expressed as:-

The above definition is also an answer to the well- known and mostly asked question "What is the Central Limit Theorem in Statistics?"

Laplace was the first to state this theory in 1812 and a proof was given by Liapounoff under general conditions in 1901. Commonly speaking, a Central Limit Theorem is a set of weak-convergence theorems used in probability theory.

Where o (n-3/2) represents terms involving n3/2 and more high powers of n in the denominator. Proceeding to the limits as limit and n ➡∞

Which is M.G.F of standard normal variate. Hence by uniqueness of M.G.F’s Z =

This theorem, named after Russian mathematician Aleksandr Lyapunov. States that:

Here the assumptions made are -

Where O3 contains terms with t3 and higher powers of t.

And since, Xi’s are independent, we get

Where o(n-3/2) represents terms involving n3/2  and higher powers of n in the denominator proceeding to the limits as limit and n tends to infinity,

This is the Central Limit Theorem for generalized case when the variables are identically distributed and some further conditions are imposed.

Suppose that the third absolute moment say pi3 of Xi about its mean exists i.e.

Hence, for identical variables, the conditions of Liapounoff’s theorem are satisfied.

It may be pointed out that Lindebergh- Levy theorem is not a particular case of Liapounoff’s theorem since the former does not assume the existence of the third moment.

C.L.T can be stated in other forms too which are as follows: 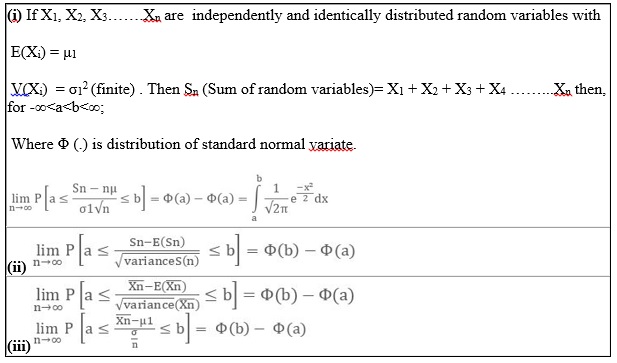 (c) If Yn is distributed as Pn then,

1. Both the Central Limit Theorem and the Weak Law of Large Numbers (WLLN) hold good for the sequence of i.i.d random variables with finite mean μ and variance σ2. However in this case the CLT gives a stronger result then the WLLN in the sense that the former provides an estimate of P [|(Sn -nμ)/n| ] as given below: 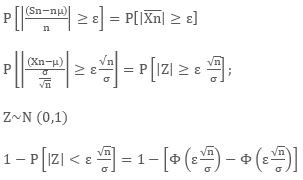 where Φ (.) is the distribution function of standard normal variate. However, WLLN does not require the existence of variance.

3. For the sequence {Xn} of independent r.v.’s, CLT may hold good, but the WLLN may not hold well.

1. Suppose a school has 1200 students, with 200 each in grades from 7-12th standard. Here, each student has an effect on marks and each student’s marks are independent of each other.

If we take a sample of 25 students each for their marks and take total 10 samples and find the mean grade. We observe that first sample has 9.52, then, we find other sample’s mean is 932 hence, the table showing grades of different students are shown below:

When samples are taken and means are calculated, each time the mean, starts to form their own distribution.  This distribution is the sampling distribution because it represents the distribution of estimates from population on repeated samples.  In such a case, a histogram of sample means, of say, 1,000 samples would appear like the following. 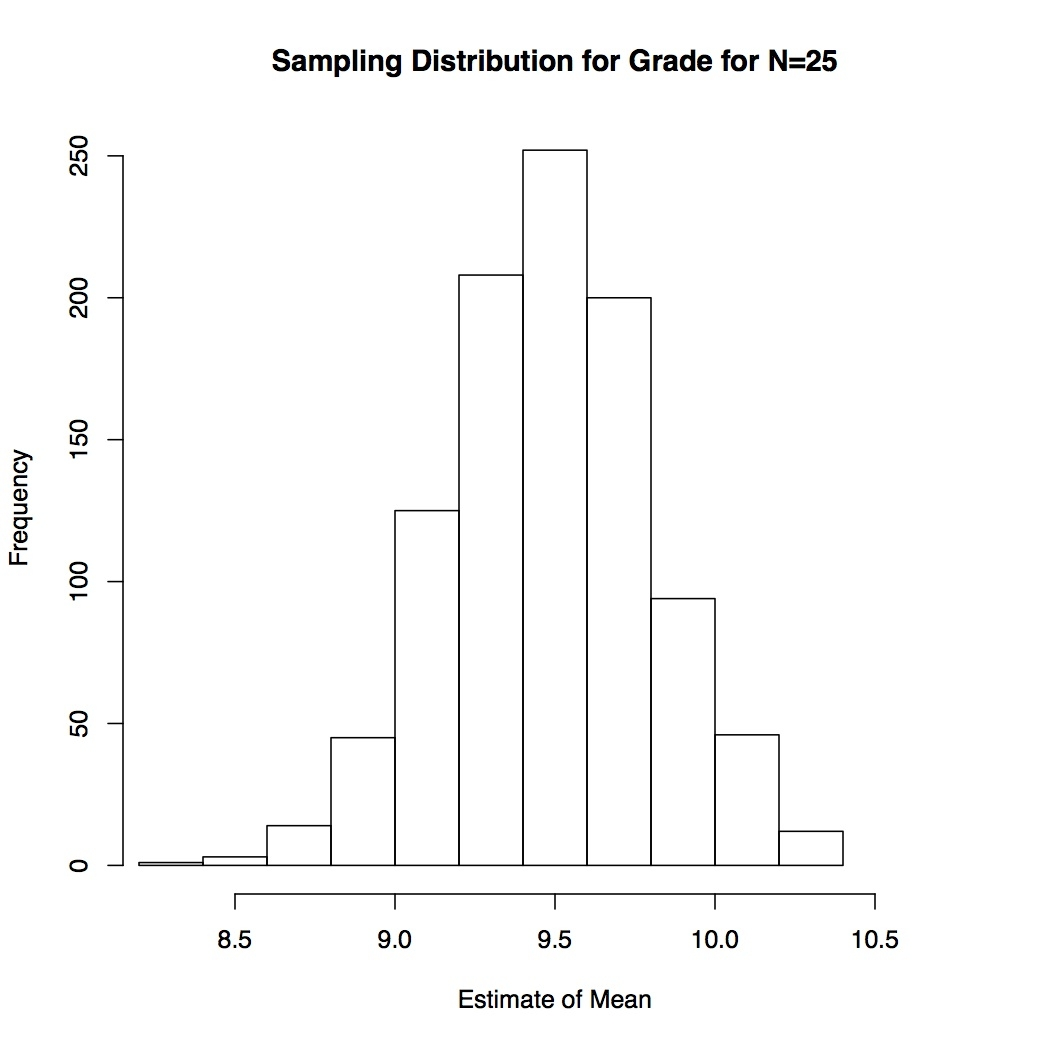 i) Decrease in population variance or

ii) With the increment in sample size.

3. The probability distribution for total distance covered in a walk (biased or unbiased) will tend towards a normal distribution.

4. Flipping coins for a large n will result in a normal distribution for the total of heads (or equivalently total number of tails).

Sir Francis Galton was an English Victorian statistician, progressive, polymath, sociologist, psychologist, anthropologist, eugenicist, tropical explorer, geographer, inventor, meteorologist, proto-geneticist, and psychometrician, knighted in 1909. He produced over 340 papers and books and created the statistical concept of correlation and widely promoted regression towards the mean. He was the first man to apply statistical methods to the study of human differences and inheritance of intelligence, and introduced the use of questionnaires and surveys for collecting data on human communities, which he needed for genealogical and biographical works and for his anthropometric studies. He quoted as:

"I know of scarcely anything so apt to impress the imagination as the wonderful form of cosmic order expressed by the “Law of Frequency of Error”. The law would have been personified by the Greeks and defied, if they had known of it. It reigns with serenity and in complete self-effacement, amidst the wildest confusion. The huger the mob, and the greater the apparent anarchy, the more perfect is its sway. It is the supreme Law of Unreason. Whenever a large sample of chaotic elements are taken in hand and marshaled in the order of their magnitude, an unsuspected and most beautiful form of regularity proves to have been latent all along".