What is T Distribution?

The t distribution is developed by famous statistician William Sealy Gosset. During that period, Gosset used to work in Guinness Brewery; a company into business of alcohol beverages. His employer did not allow him or any of their staff to use their own names for publishing any scientific papers. William Gosset used fictitious name ‘Student’ for publication of his paper in Biometrika in year 1908. Hence the T distribution is called Student's T distribution.

Z and U are defined as follows:

This T has n-1 degrees of freedom. This n can be any positive real number (n > 0), however only integer values of n are of importance.

Derivation of T score using this definition is as follows:

Facts and Figures About T Distribution

Probability density function (PDF) of T distribution is given by,

This PDF is also written as: 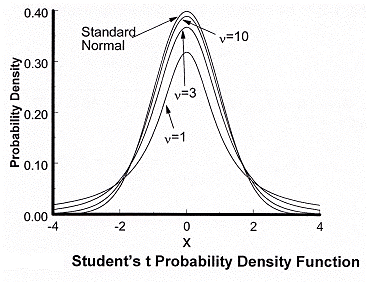 Cumulative distribution function (CDF) is given by, 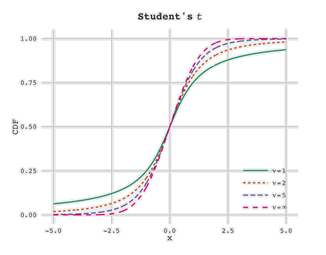 Measures of central tendency of T distribution are given below:

It shows that random variable t with n degrees of freedom is symmetrically distributed around zero like normal distribution.

Variance of T distribution is , valid for n /n-2 > 2 only. It is not defined for any other values.

All odd order central moments are zero. Hence this distribution is symmetric around zero.

Even order central moments are given below:

The noncentral t distribution has n degrees of freedom and noncentrality parameter δ and its form is as given below.

Its PDF is given by,

Uses and Applications of T Distribution

T distribution plays important role in inference theory where estimation of unknown location parameter is done using Statistical T tests. T tests are of different types. T tests (based on Student’s t distribution) are preferred over Z tests (based on normal distribution) when population standard deviation (σ) is not known and sample size is very small. In case sample size is large (n > 30), we can use Normal distribution i.e. Z tests for inference of population mean even if population standard deviation is not known based on Central Limit Theorem.

There are certain assumptions which must be satisfied if we want to use Student’s t tests. These assumptions are listed below.

When sample size (n) is small and population standard deviation (σ) is not given, we can use one sample T test for determining significance of population mean. Brief steps for this T test are described below:

Alternative Hypothesis: µ ≠ µ0 (It can be ≠ or > or < depending upon direction of Research hypothesis)

Formula for confidence interval for mean (µ) is given below:

Where Sp is pooled estimate for standard deviation and it is calculated as follows:

Formula for confidence interval for difference in means  when population standard deviations are unknown and equal is given below:

The degree of freedom is given by, DF

Formula for confidence interval for difference in means µ1 - µ2 when population standard deviations are unknown and unequal is given below:

When we have to compare two samples drawn from dependent populations, we can use dependent samples T tests. It is also known as repeated measures T test or paired T test.

Where standard deviation of

is given by formula

Formula for confidence interval for paired difference is given below:

When we have to determine significance of linear correlation coefficient, test based on t distribution is used as follows.

Rejection Region Curves for one Tailed and Two Tailed Tests: 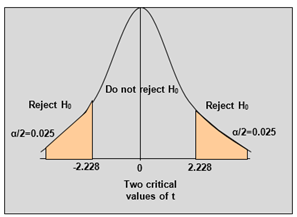 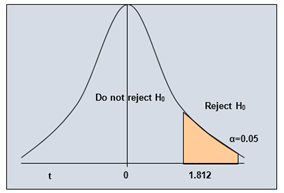 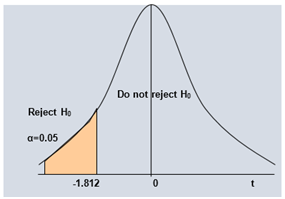 These critical values for t distribution can be calculated in Excel, Minitab, SPSS, R or any other statistical package very easily.

It gives critical value for the probability associated with the two-tailed Student's T-distribution and corresponding degrees of freedom.

To determine p value, use function in Excel:

It gives p value for the numeric value at which we want to evaluate the distribution for given degrees of freedom and one tailed or two tailed test.

T distribution in R can be calculated by using command:

T distribution in SAS can be calculated by using command:

T distribution table is given below: 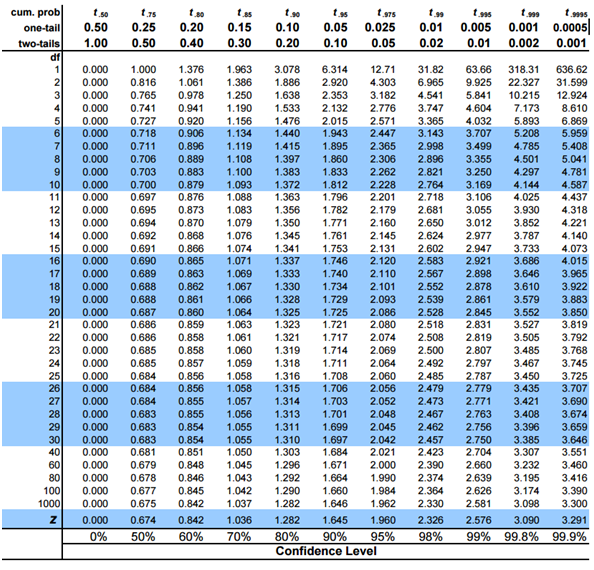 This T table can be used for given alpha from row 1 and row 2 based on one tailed and two tailed test for corresponding degrees of freedom.

There are various calculators available online which gives these T critical values, computes T test statistic and solves these T tests online similar to statistical packages. We need to input values as per required formats in these calculator

If you need more help in t-distribution