When a collection of things belong to a certain definition, it is known as a Set. When these set show a degree of membership, it is known as fuzzy set. Fuzzy set theory was given by the Professor Lofti Zadeh and Dieter Klaua, University of California 1965.

When we use classical set theory, the memberships of element are represented in the Binary terms. In Binary terms, identifying whether an element belongs to a set or does not is known as bivalent condition. But in fuzzy set, we can gradually assess the membership of element of a set. In Fuzzy Set, the classical set is generalized, as the indicator functions of the classical set are special case membership functions of fuzzy set. These binary sets are usually called crisp sets in case of fuzzy set. In general, we are just trying to analyse or arrive at a conclusion whether a given observation lies within the set or outside or as a continuum as a partial member of the set.

Why Fuzzy Set is used?

How Fuzzy Set is used?

In fuzzy set, lets say ‘A’ is the membership function; its range will be within unit interval. At any point the value of function will be the degree of membership of the point in set A.

We have set of car for sale in the area.

A = Fuzzy Set of car to be purchased

Value assigned for each car will be in between 0 to 1 which will be the degree of membership of the particular car in the Fuzzy set A.

Therefore, the Fuzzy membership function will measure, the attractiveness for the particular car. Like in this case, you like a car very much, its value u will be in larger side say 0.8 or 0.9 but for the less attractiveness of the car it will be on lower side say 0.2 or 0.10.

It is a 95% confidence interval for µ.

Therefore, function of µ it has constant coverage of the probability.

We make a set of tall men and make an assumption that people above 6 feet will be tall and represent the same as a set. Now the populations that we will consider will be either present in the set or absent in the set. These membership functions work better in the binary function, however in the real-world function, they do not hold well. In the real-world operation, it will put a person with height of 6’1inch and 7’2 inch in the same set and similarly it will put → 5’11 and 6’0 in different set though they have only just 1 inch of difference. It means that this kind of set will put it as tall and not tall. Therefore, that will imply à 5’11 is not tall in the set and 6’0 inch is tall in this set.

What is Crisp Set?

A crisp set is a classical set where member can either be in the set or outside the set while in the fuzzy set member can be partially in the set. For Crisp set, the value is assigned either 0 or 1 since it follows the binary system for each element of the universe. The assignment of the Binary number differentiates the crisp set as member and the non- member.

The crisp set is also known as the classical set or ordinary set theory. Therefore, it’s a conventional set for which elements are either members or non- members.

What is membership function in Fuzzy Logic?

The membership function is a curve to define each element in the input space; it is valued as degree of membership between 0 to 1. The input space is also known as ‘Universe of Discourse’.

The only condition for the membership function is to lie between 0 to 1. We can express a classical set as follows:

The fuzzy set is the extension of the classical set.  Let X= Input space or Universe of Discourse

Then fuzzy set A for X will be as follows:

µA(x) = memberships function of x in A

In fuzzy set, each element of X will have membership value in between 0 to 1.

We can apply fuzzy logic for sub range of continuous variables. For example, if temperature of anti–lock brakes has separate membership function, where we need a particular temperature range to control the Brake properly, then the function will map the value between 0 to 1 ranges for the temperature. These truth values is used to determine the temperature controlled method for Brake.

The cold, warm and the hot are various temperatures represented in the functional mapping scale.

Fuzzy Set Theory and its Application

The fuzzy set theory is used in the cases where the data cannot be gathered with certainty and reasonableness.

Fuzzy logic for the very first time was successfully used and implemented in Japan to improve the economy, comfort and precision while travelling in a high- speed train.

Fuzzy Set Approach in Data Mining: In the recent years, the fuzzy set theory was used to explore several aspects of data mining and other knowledge discovery method. As many of the data in the data mining are vague therefore fuzzy set helps in providing value to each element.

Fuzzy Set Application in Social Science: The Fuzzy set theory is also used in the social science. The main aim of using fuzzy set in this case is that we do not have any precise data on any research topic. We can use fuzzy set for the measurement.

Fuzzy Set Application in Medical Science: Similarly, we can use fuzzy set in case of medical science also; to get the conclusion from the subjective data; we can provide elementary value for the conclusion result.

Other areas of application of fuzzy technology are in the fields of artificial intelligence, computer science, decision making, management science, operations research, robotics and many others.

Therefore, in case of crisp set we will have functions only as 1 or 0; it can be either within the set or out of the set like tall or dwarf. In case of Fuzzy set the data are in between u=0 and u=1. It can have any value in between and the value represent more characteristics as 0.8 will tell the taller men while 0.2 will tell the dwarf men. The advantage is that middle values too can be utilized in case of fuzzy set as compared to crisp set.

When we have to derive any conclusion from the data which are not certain then we can use the Fuzzy Theory. The Fuzzy set has been used in the wide variety of ranges like medical sciences data or the social science data analysis or in case of data mining to conclude the result where we do not have the precise data. 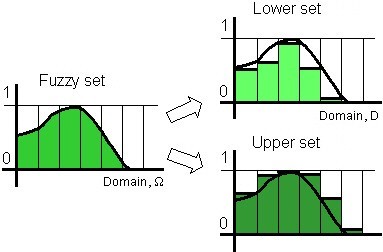